Cat lovers consider sweet, soulful, kitty eyes gazing at them to be heartwarming. Those feline glances can melt some human hearts. But after the loss of a feline, canine, or human companion, could those mournful eyes indicate that the cat is actually mourning?

Do cats have emotions? 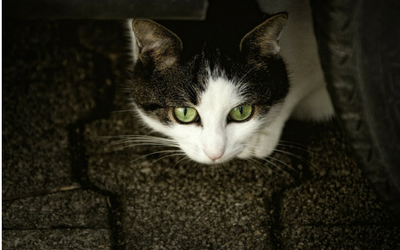 It is difficult to assess what those mournful eyes mean since our feline friends cannot tell us what they are feeling. Even though cats cannot verbalize that they are happy or sad, astute pet owners interpret their pets’ emotions based on behavior. With these interpretations in mind, it is commonly acknowledged that cats do feel happiness, sadness, possessiveness and fear. They also get angry and nervous. And despite the fact that cats are often aloof, they are social animals that form attachments to two and four-footed family members. And they do indeed mourn.

What are the signs of mourning?

When a cat loses a companion, whether animal or human, she most certainly grieves and reacts to the changes in her life. Cats alter their behavior when they mourn much like people do:

Pet owners recognize these changes in daily behavior as the same ones that grieving humans often exhibit. The common denominator in human or feline grief is the loss of a central individual (animal or human) along with the associated bond.

Skeptics suggest that cats don’t really grieve and attribute their behavioral changes to the alterations in daily routine resulting from the absence of an integral figure in the cat’s life. In other words, the cat gets “upset” because her schedule is off. With the loss of a companion cat, perhaps the surviving cat misses feline interaction and play time. With the loss of a human companion, perhaps the established and accepted feeding and play schedules are changed as the new care giver takes charge. Since they may not actually understand death as something permanent, sometimes a cat will wait patiently, believing that the deceased will return. Still others suggest that the cat may just be reacting to the grief exhibited by humans in the house as they deal with the death of a family member.

Has there been any research on the subject?

Skepticism aside, there are many animal behaviorists who believe that cats really do mourn. Much was learned by a survey conducted in 1996 by the American Society for the Prevention of Cruelty to Animals (ASPCA). The study, Companion Animal Mourning Project, gathered data that shed new light on the feline grieving process. The survey study focused on common signs associated with mourning and found that:

The study, which assessed many different behavior patterns, concluded that 65% of cats experienced four or more behavioral changes after the loss of a family pet which indicated grief.

How can I help my cat cope with grief?

When signs of grief become evident following the loss of an animal or human family member, concerned owners can help their cats deal with grief in the following ways:

Establishing a new, comfortable social structure in the home following the loss of a human or animal family member is important for the entire family, but even more so for cats. People have lives that extend outside the immediate family unit and help distract them from grief or place the loss in a broader perspective. They have friends at work, make plans for social interactions and gatherings, see people at the gym, and communicate with distant friends and relatives electronically.

Cats have a much narrower social structure with set boundaries that extend only as far as the inside of the house or the perimeter of the yard. Their days are focused on a much smaller social periphery that may include only the other pets and people within the immediate family unit. When a member of that family unit is gone, there is a huge void in the cat’s life and they may need help in dealing with loss.

Time will also contribute to the healing process of both pet and pet owner. Loss will become easier to bear and fond memories will replace sorrow.  And the relationship between the survivors, feline and human, may evolve into something even more beautiful as a new way of life is established following a loss.

© Copyright 2017 LifeLearn Inc. Used and/or modified with permission under license.

Connect with us and one of our team members will be happy to assist you.