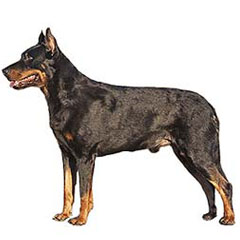 The Beauceron may have originated as long ago as the 1500s in the plains area surrounding Paris, known as La Beauce. Farmers used him as an all-purpose farm dog, guarding the farm, family, and livestock, and also driving sheep and sometimes, cattle. By the mid-1800s, the dogs were divided into two types: a longhaired type called the Berger de Brie (now known as the Briard) and a shorthaired type called the Berge de Beauce (now known as the Beauceron). The Beauceron became the preferred herding dog of France, but it was virtually unknown outside of its native country until the world wars, when the breed gained notoriety as a messenger dog on the front lines. Its ability to follow directions, find scent trails, and detect mines still makes the Beauceron a respected military and police dog. In the 1960s, breeders made a concerted effort to preserve the qualities of native French breeds, and since that time the Beauceron's popularity has grown. In 2001, the AKC admitted the breed into the Miscellaneous class. This allowed it to compete in obedience and other companion events, as well as herding. The breed has already made a name for itself in all these areas. In March 2007, the AKC officially admitted the Beauceron into the herding class, and in June 2007, the Beauceron was able to compete in conformation dog shows right beside the German Shepherds, Border Collies, and their hairier Briard brothers.

The Beauceron is alert, courageous, and loyal, making him an ideal family guardian. He's also eager to please and extremely intelligent, gifted at any task involving learning, memory, and reasoning. He's good with children, but wary of strangers and not generally good with strange dogs. However, he gets along with other family dogs and pets.

With a sleek black-and-tan coat, upright ears, big waggy tail and frank, open expression, the Beauceron is a solid, balanced dog, not extreme in any way. He is powerful, yet agile. When he trots, his gait is fluid, with his head held at the level of the back rather than high. His jaws are strong. He has large, slightly oval eyes and high-set ears, which can be natural or more often (where allowed), cropped. His topline is strong and straight, and his tail carried low, with a slight J-hook at the end. He has double dewclaws on his hind legs.

The Beauceron is eager to please and extremely intelligent, a combination that makes for a fast learner. He responds well to reward-based techniques and loves a challenge. He does have a tendency to try to run the household unless a person is clearly in charge, so early training should foster his role as a follower. This is done not by constantly asserting your dominance, but by encouraging him to work for your attention and rewards, and by being a strong but fair leader. Give him a job and he'll work hard for you.

The Beauceron may need just a fraction of the grooming time a Briard requires, but his coat does need weekly brushing, and during periods of heavy shedding, you may want to up that to daily brushing. Clip nails, clean teeth, and give the Beauceron a good long walk and exercise session every day, along with stimulating mental challenges in the form of training, herding, or playing. He will be unhappy without lots to occupy him and plenty of time with and feedback from you. The coat requires weekly brushing, more when shedding.

The Beauceron has no major health concerns, but hip dysplasia and bloat (gastric torsion) are reported frequently enough to be of some concern. Breeding stock should have hips screened before becoming parents. Ask your breeder about these issues, and ask to see proof that the puppy's parents have had their hips screened.

Cara, who was awarded the rare Heroic Service Award by the AKC for her Search & Rescue work at the World Trade Center in 2001.

© Copyright 2014 LifeLearn Inc. Used and/or modified with permission under license.

Connect with us and one of our team members will be happy to assist you.